You are an angry walking tree protecting the forest from wood-cutting fire-wielding trolls.

Force of nature is fast-paced combat roguelike with emphasis on classic run-and-bump gameplay. Your objective in each of 7 "chapters" (game levels) is to find an exit, kill the boss guarding it and proceed to the next chapter. Apart from bump attack (with added stun chance) you have roots, which automatically damage all visible enemies in some radius every turn – serving as some kind of ranged attack.

There are only two added mechanics on top of that – converting the terrain and naturalizing the corpses.

Conversion – most of the tiles (both floor and walls) have two states, "burned" and "regrown". When you begin a chapter, most of tiles there are burned. Every turn, there is a chance that you will convert a random burned tile in your sight to regrown one. When this happens, you are getting small damage bonus and small health regeneration for the next few turns (this is called 'Grace' in game). This is your only reliable source of healing, and running out of terrain to regrow means you won't be able to heal yourself.

Naturalizing – corpses left by enemies can be naturalized (eaten) to get new talents and permanent bonuses. The problem is that naturalizing lasts for several turns and can not be interrupted, so it could be very dangerous (but possible and sometimes justified) to do this while being surrounded by enemies. Corpses deteriorate and disappear quickly while on the ground. Naturalizing is also used to pick up power-ups ("essences").

There are also lots of fire. Standing in fire or being attacked by fire could lead to your tree catching the fire up and burning for several turns. Burning stacks to 10 and could be very dangerous on higher stack levels. Standing in water instantly removes all fires from you.

You can develop your tree by getting experience levels, picking up essences and by naturalizing the corpses. There are talents (3 initially, but you can get more from corpses) which enhance your powers. Talents can be upgraded by spending talent points on them (<level+1> points are required to raise talent level by 1). Gains from upgrading your talents are slow at first, but can be rather powerful on higher levels.

Have fun restoring the forest and killing these pesky trolls!

- WebGL version could be lagging on slow PC's (Well, it's Unity).

- Sometimes level generator can't find a proper room to put you at the start, so you begin the level standing at random spot, usually surrounded by random bosses. After some thought, I decided not to fix it.

- Fair amount of silly English mistakes here and there.

- Windows version was tested on Windows7

Gem of a game sir. Beat multiple times and has become another side quick play for me at work. Cheers & Great job! 😉

Liked the game.  One thing I'd improve is to add some indication on boss room doors. Often they're right at the spawn area, or I just not readdy to deal with boss yet, but I can incidently encounter him anyway.

As a rogue-like you'd be diminishing the game for all if you removed this option. 1st clear easy side paths & monster pits before taking on possible boss doors.

Biding of Isaak has indication of boss and other special rooms, it only adds an another layer of stretegic thinking: am I strong enough to fight boss at the moment? should I risk spending resouces to get upgrades? how exactly should I spend my resources?... also it minimizes the ammount of mindles wandering on the map.

Your game is quiet different from the Binding of Isaac though... IDK, it just feels a bit unfare when I was dying from bosses for the said reason.

wow, another amazing rogue like... got good taste! Use similar strategy tho if you want to win at this, I have several times now. Still can't believe he made in <7d!

Really enjoyed this, thankyou very much. Still can't get past level 3 through. Levelling talents is not rewarding enough.

Excellent game, really having some trouble getting past level 3 though. The mechanic of naturalizing is awesome, really gives a lot of flavor to the game. If there is one thing I could say I needed more it would be more variety of the new learned skills. The art style was really great as well, simple yet very expressive and coherent

if you find the game window too small, in desktop version alt + enter to full screen it, helps a whole lot.

Beat it! This was sooo fun. Inspired mechanics + setting :)

Now to catch up on sleep... 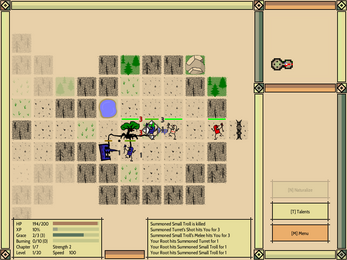 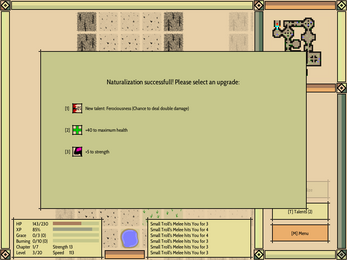 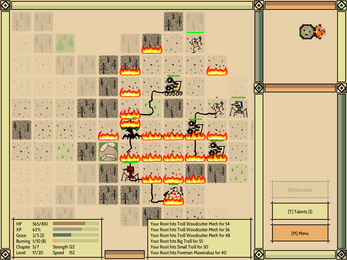